Many articles said “The best Windows ever”.  Looks like could be a true. However Windows 10 has pluses and minuses. 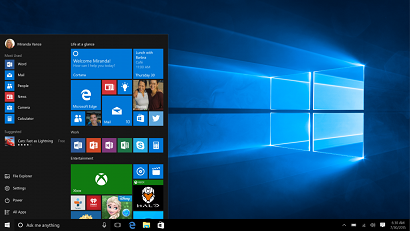 Installation is very simple, no big problems the same as in previous Windows 8.1 version;
Custom configuration doesn’t have too many settings, it ask only a few permissions to use your locations and etc.;
Windows runs fast as Windows 8.1;
The big plus is no anymore functional corners, so both type applications running  on the them screen as it was already implemented in latest updates of Windows 8.1;
Who used Windows 7, 8 or 8.1 will not have big problems in navigation;
It has new browser “Microsoft Edge”, looks like similar to chrome or Firefox.

What is about minuses?

On configuration screens “nice” design with a big buttons, that is annoying on desktop , maybe it’s better to tablets but not for desktop;
Another problem it’s no menu configuration as previous Windows 7, hard to use menu specially for developers, who has many programs installed, easy to make a search in search box;
Search box it’s too big and take 1/5 of toolbar;
No Windows update configuration, you cannot set to not update anymore, that can create some “unpredictable” problems in a feature;

From first look Windows 10 could be a usable system for people who still using Windows 7 and Windows XP.  They will not be shocked as people, who moved to Windows 8 from XP and 7.